How Developers use Node.js - Survey Results

RisingStack, the provider of Trace - a next-gen Node.js debugging and performance monitoring solution and silver member of the Node Foundation conducted a survey during 2016 Summer to find out how developers use Node.js and what technologies they prefer with it. This article summarizes the results.

The survey was open for 35 days from 11 July until 15 August 2016. During this period, 1126 Node.js developers completed it. 55% of them have more than two years of Node.js experience, while 26% uses Node between one and two years. 20% works at a company that is publicly traded, 7% at a Fortune 500 enterprise. 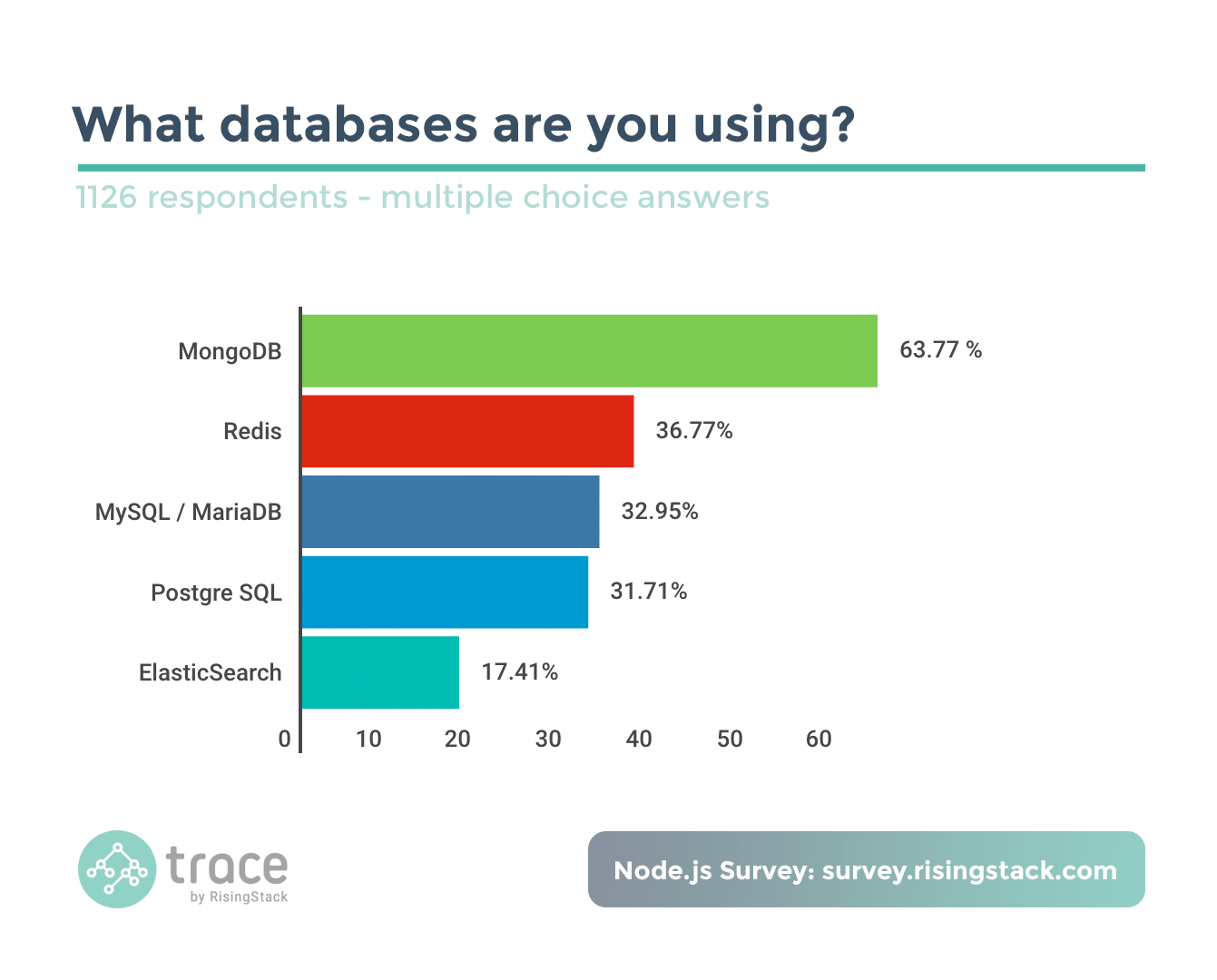 According to the results, MongoDB is clearly the go-to database for Node.js developers. Roughly ⅔ of our respondents claimed that they use MongoDB with their Node.js applications. It's also worth noticing that the popularity of Redis is massively increasing with the experience of Node engineers. This trend is also true in the case of PostgreSQL and ElasticSearch. 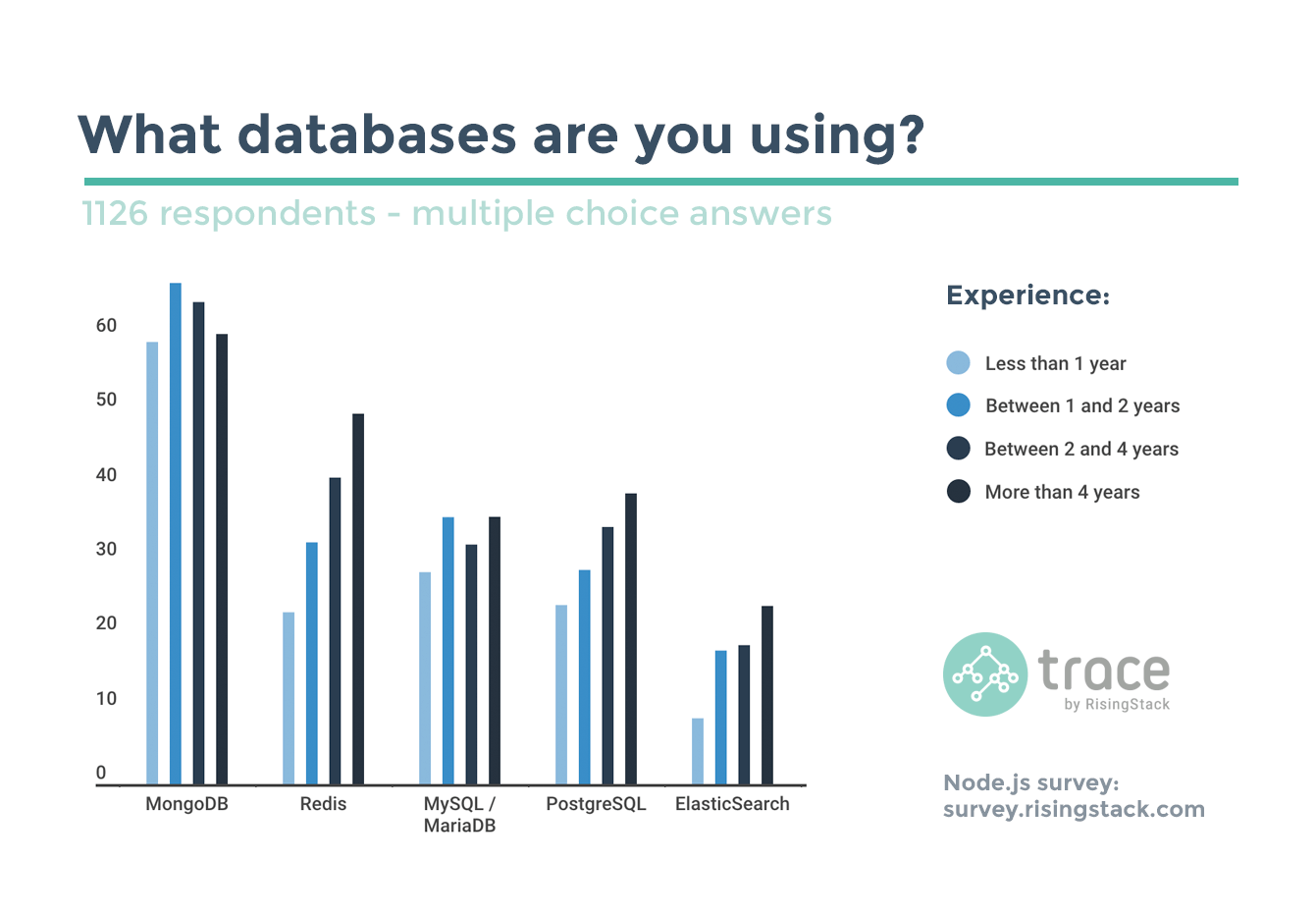 Redis leads as a caching solution, but a lot of developers still don’t do it 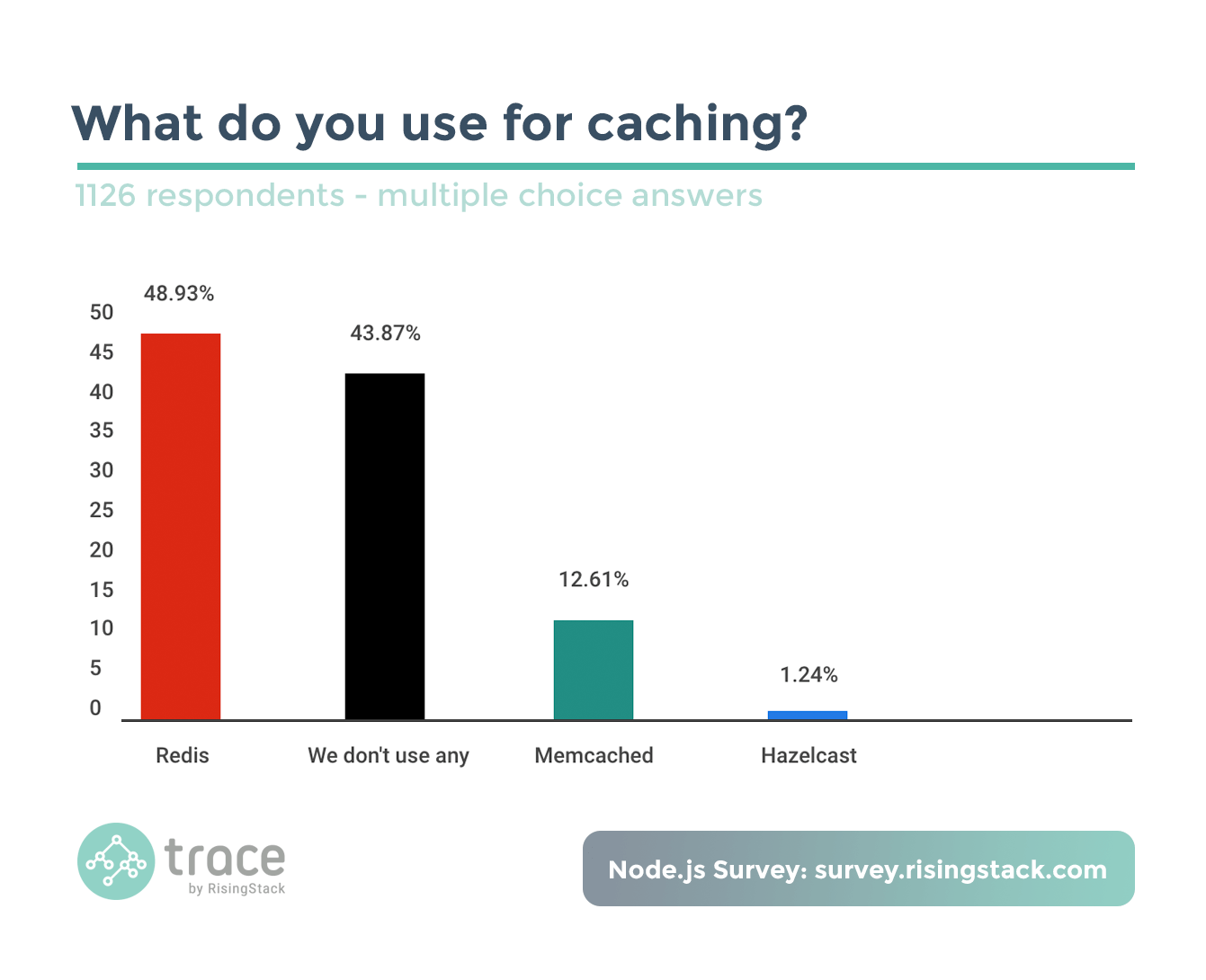 Half of our respondents said that they are using Redis for caching, but a staggering 45% stated that they don’t use any. Cross referencing the answers with developer experience allows us to see that the popularity of Redis is quite high amongst long-time Node users, compared to engineers with less than one year of Node.js experience. 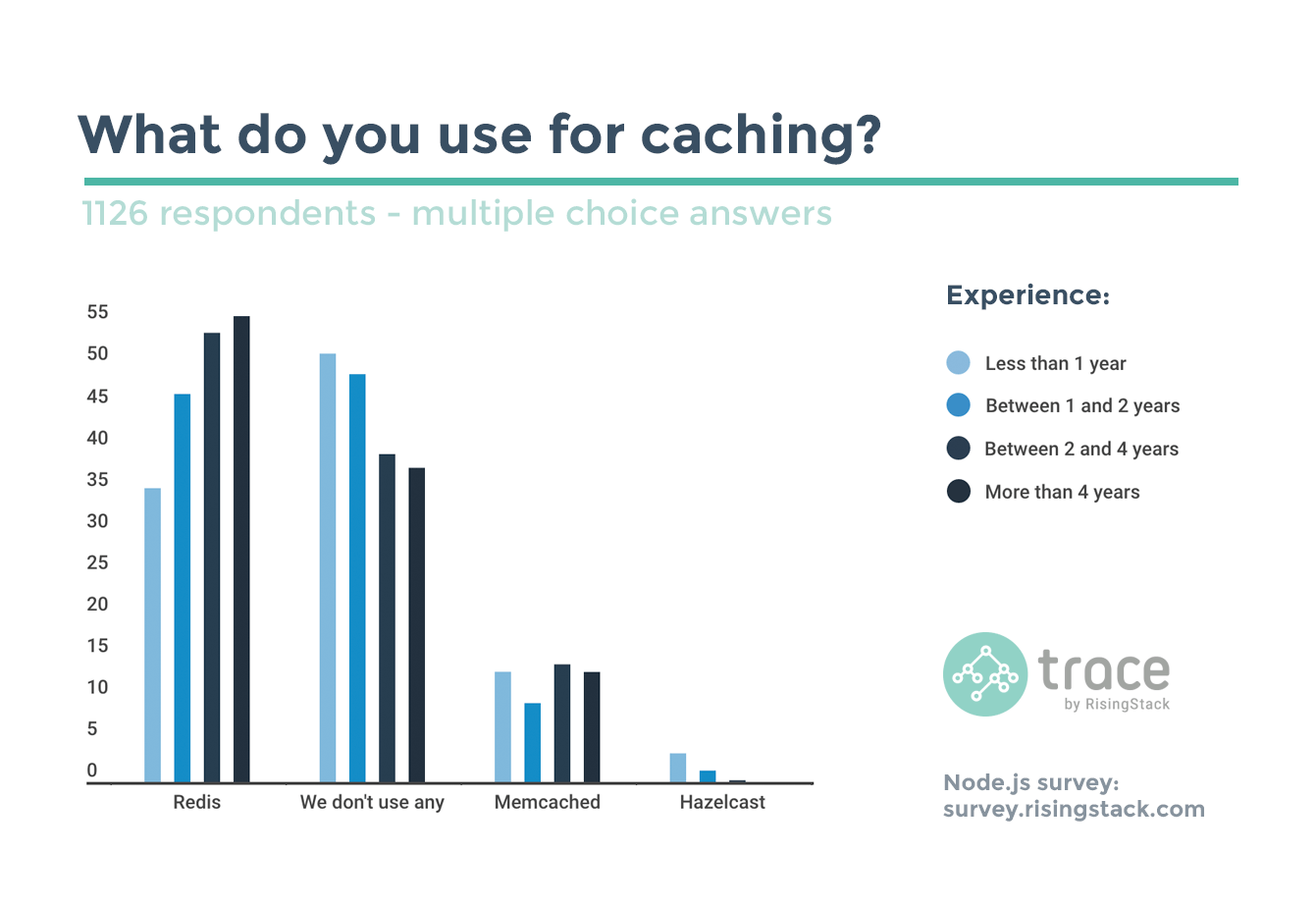 The popularity of messaging systems is still low

According to our survey, 58% of Node.js developers don't use any messaging systems. This means that either developers are rarely using messaging in their microservices system, they use REST API-s or they don’t have a sophisticated system in place. 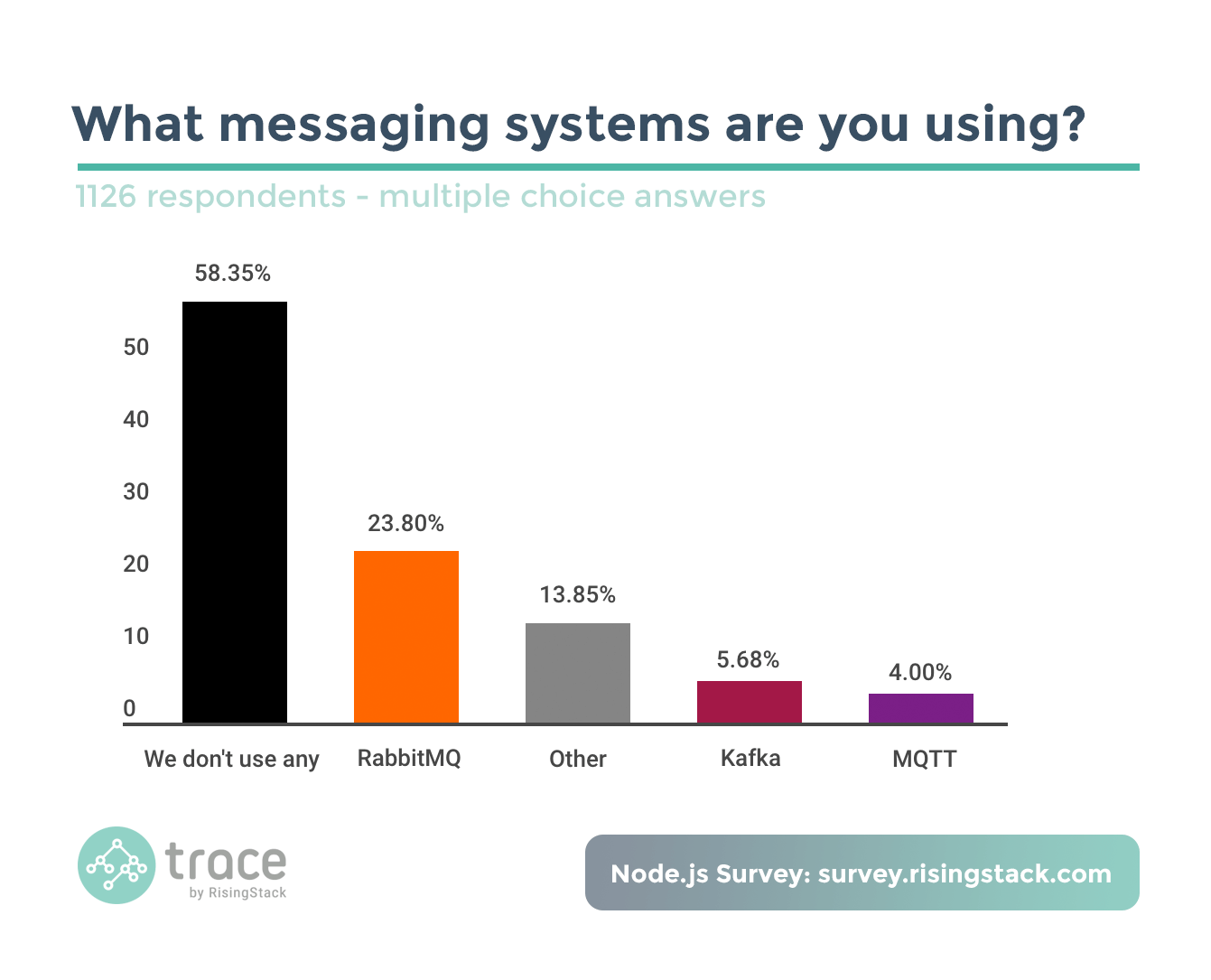 Those who use Messaging systems answered that they mostly use RabbitMQ (24% of all respondents). If we only investigate the responses of people who use messaging systems, RabbitMQ beats the rest of the existing solutions by far. 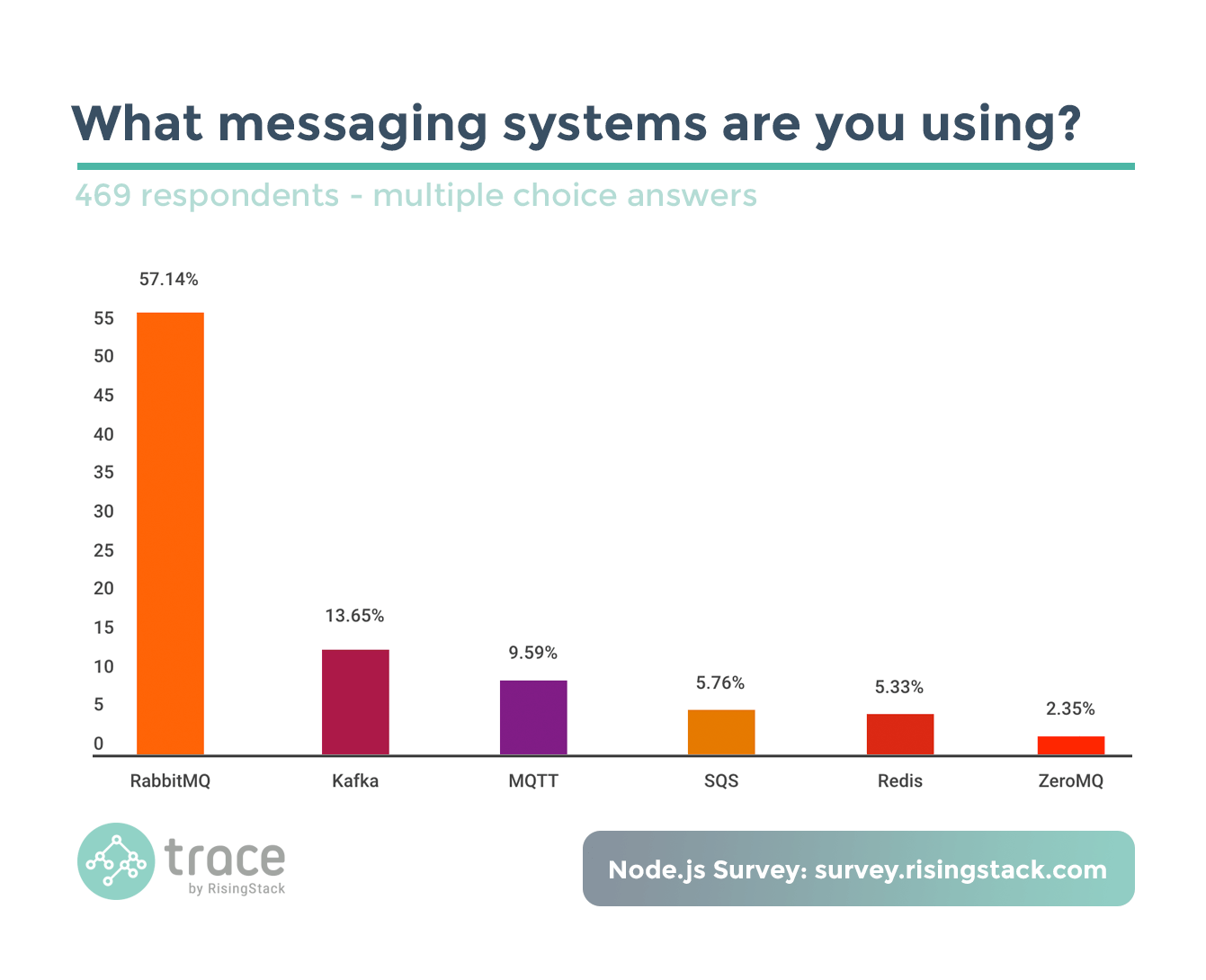 Node.js apps are most likely running on AWS

According to our survey, 43% of Node.js developers use AWS for running their applications, but running an own datacenter is popular as well (34%) especially amongst enterprises (nearly 50% of them has own datacenters) - but this is no surprise. 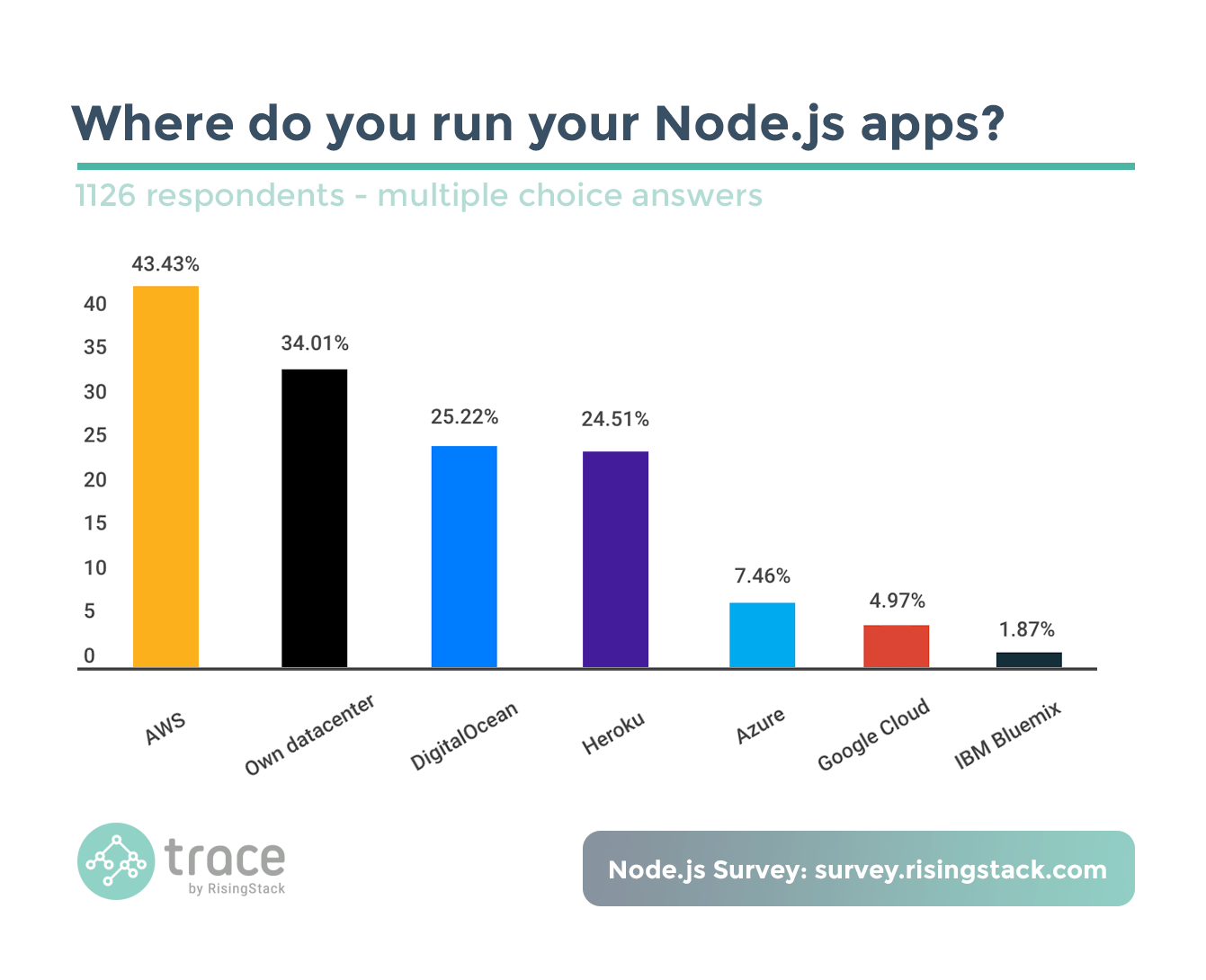 What’s interesting though is that Heroku and DigitalOcean are competing neck and neck to become the second biggest cloud platform for Node.js. According to our data, DigitalOcean is more popular with smaller companies (under 50) while Heroku stays strong as an enterprise solution as well. 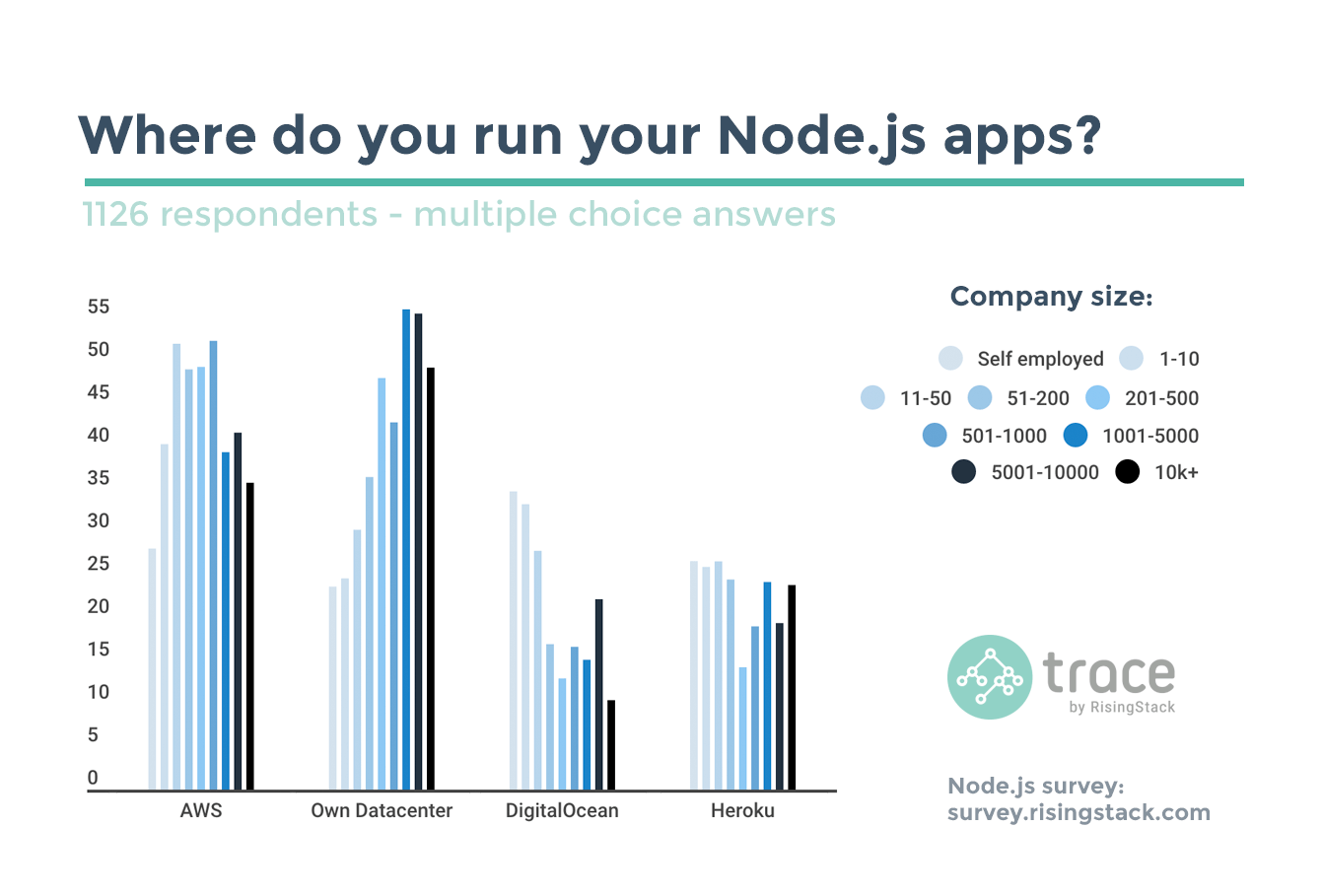 Docker dominates in the Node community

Currently, Docker containers are the go-to solution for most of Node.js developers (47% of all respondents claimed to use it - which is 73% of all container tech users in the survey). Docker seems to be equally popular within all company sizes - but advanced developers appear to be using it much more (the ones with over one year’s of experience). 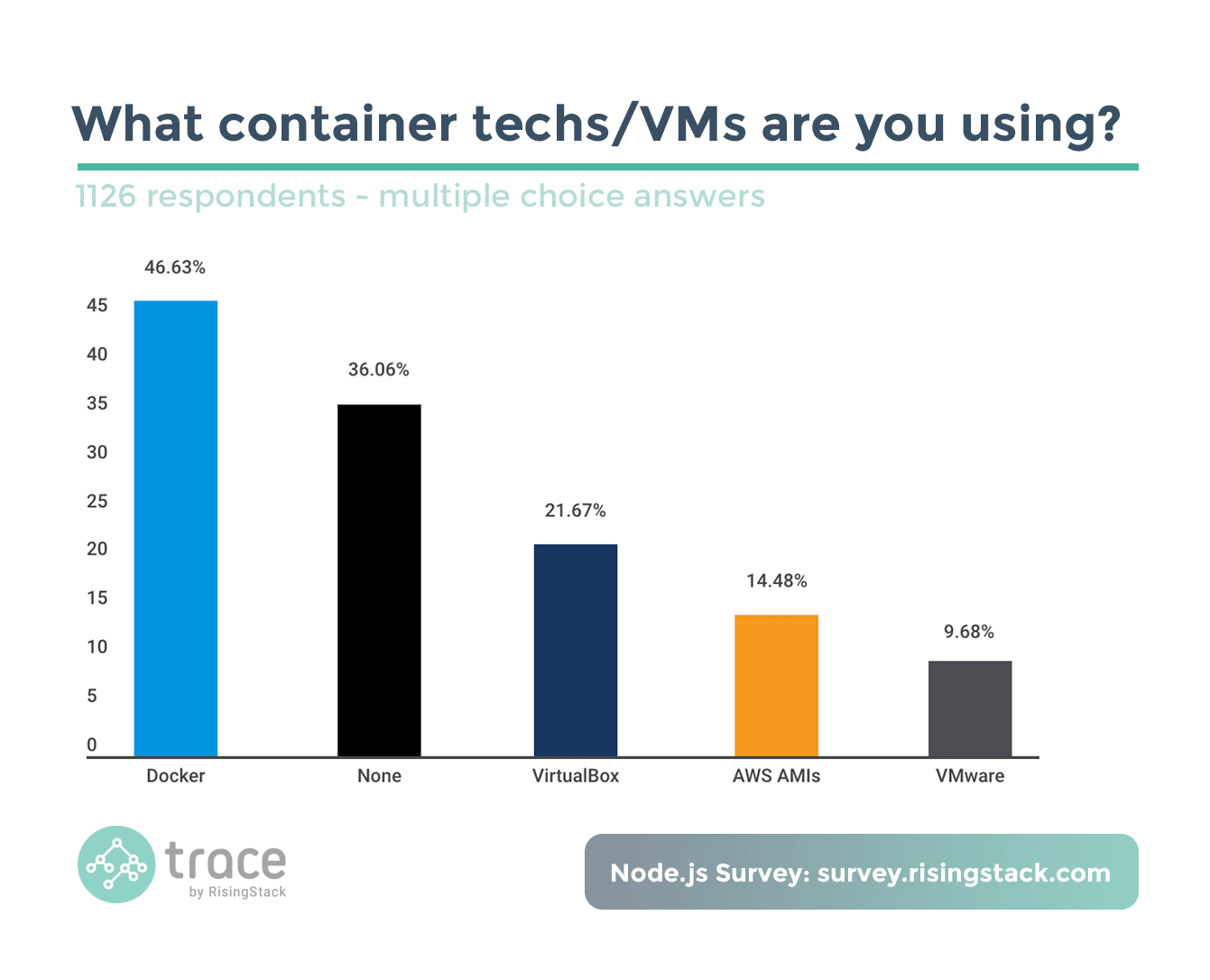 64% of the respondents said that they use some container technology - which means that the popularity of containers rose since the last major Node.js survey from 45% with a significant 20% increase since January 2016. 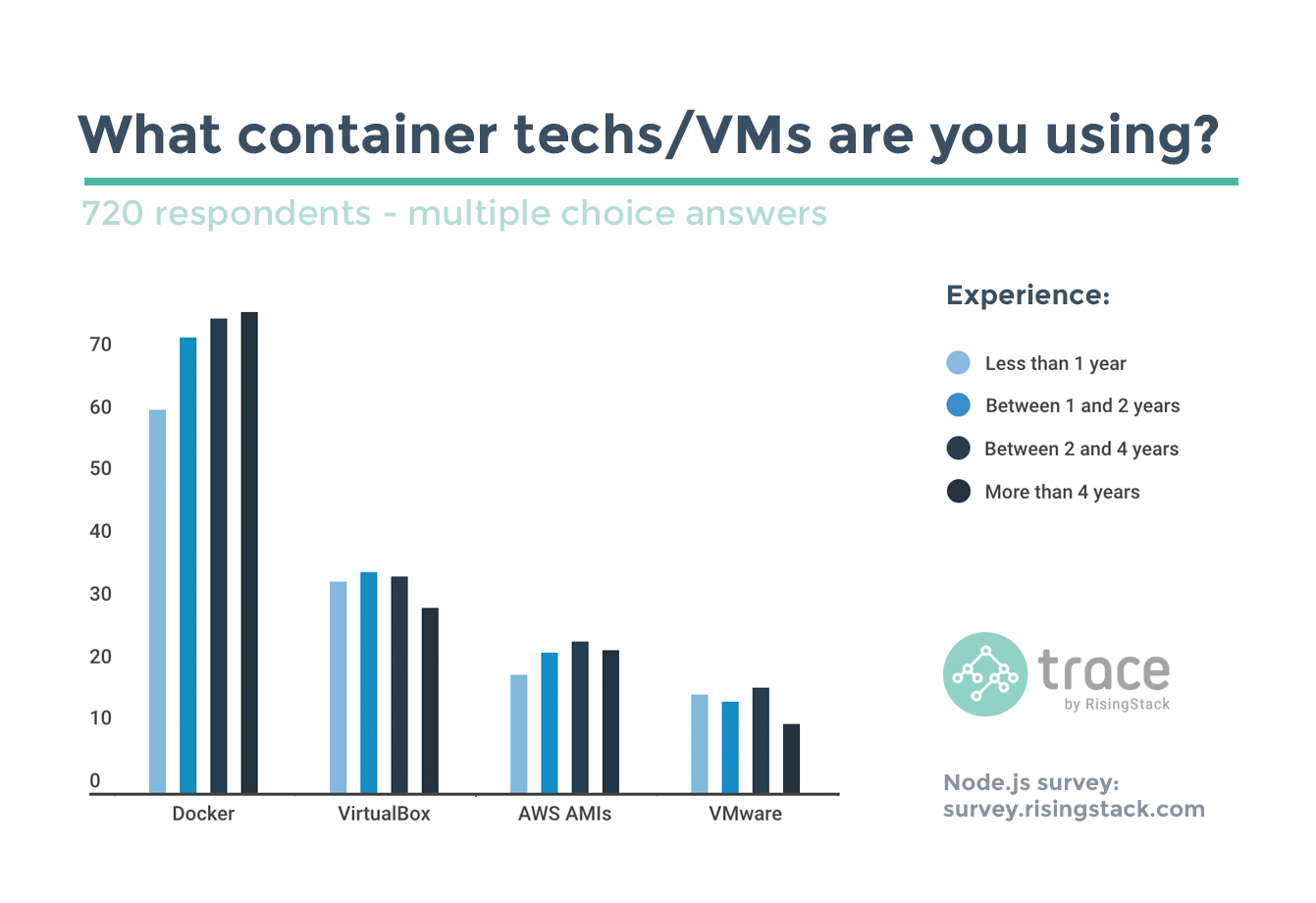 Amazon Container Service is the first choice for running containers 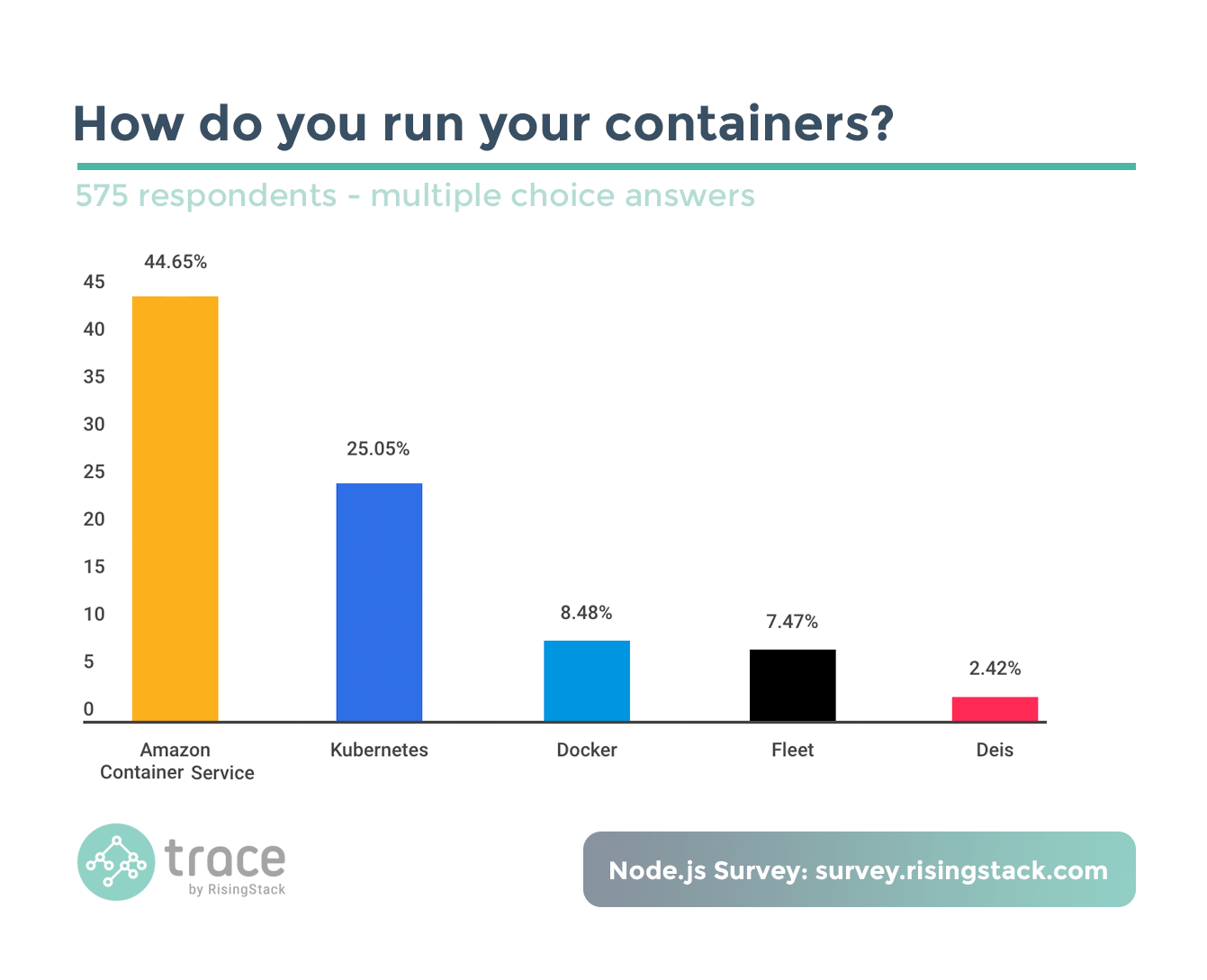 While Amazon Container Service leads as the choice of running containers with Node.js, it’s worth noting that Kubernetes is already on 25% according to our survey, and it seems to be popular especially with enterprise Node.js developers. 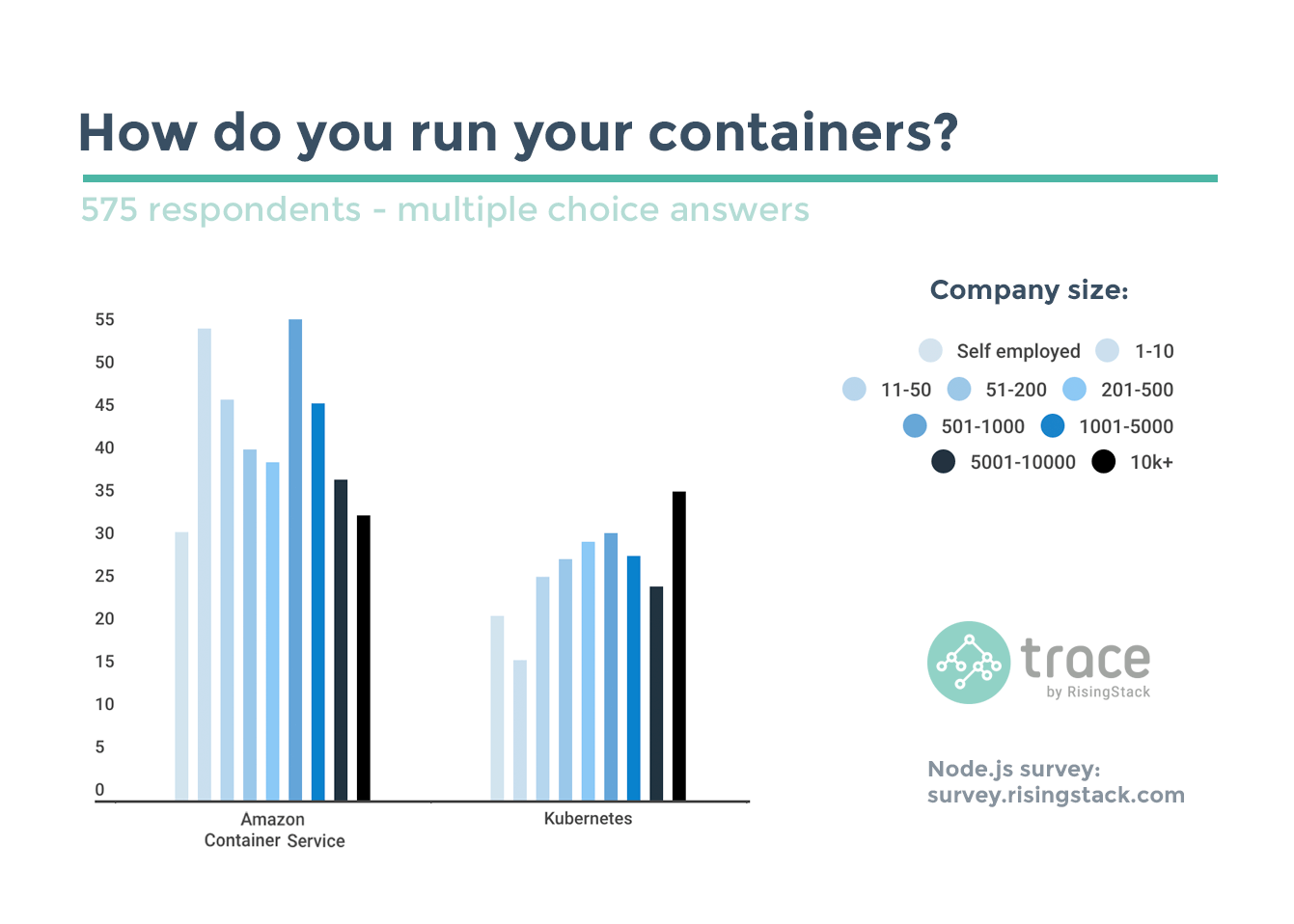 Configuration files are being used more often than environmental variables

The majority of Node developers (59% vs. 38%) prefer config files over credentials. Only 29 respondents (3%) stated that they use both. 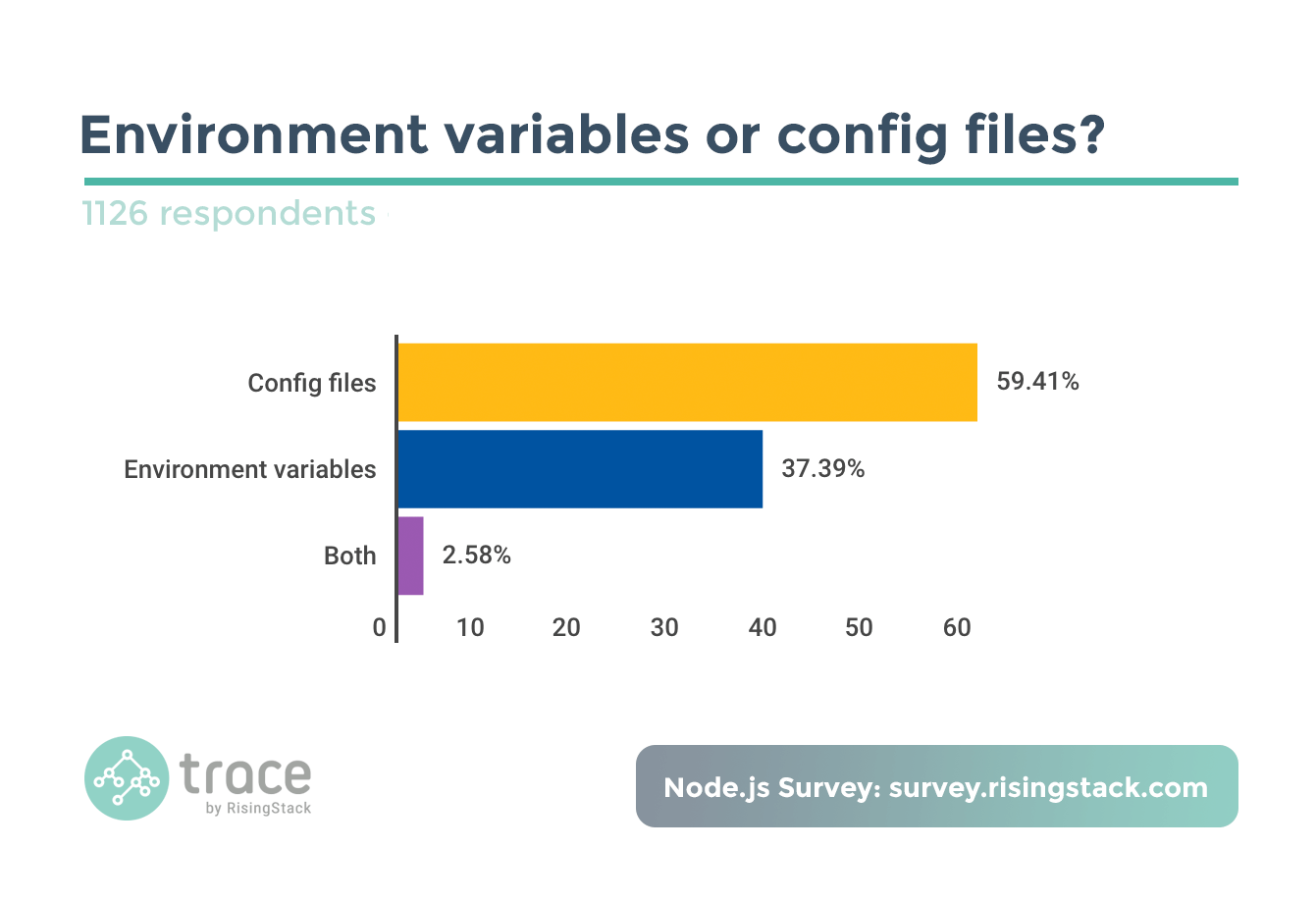 Using only configuration files suggests a possible security problem since it implies that credentials are stored in the repositories. If you have the credentials to productions systems in GitHub, you can quickly run into trouble with rogue developers.

Using Env vars is highly recommended for secrets - while developers can still use config files in general.

In Node.js - most of the core libraries are working with callbacks. The results show that Node.js users are leaning towards using promises right now. 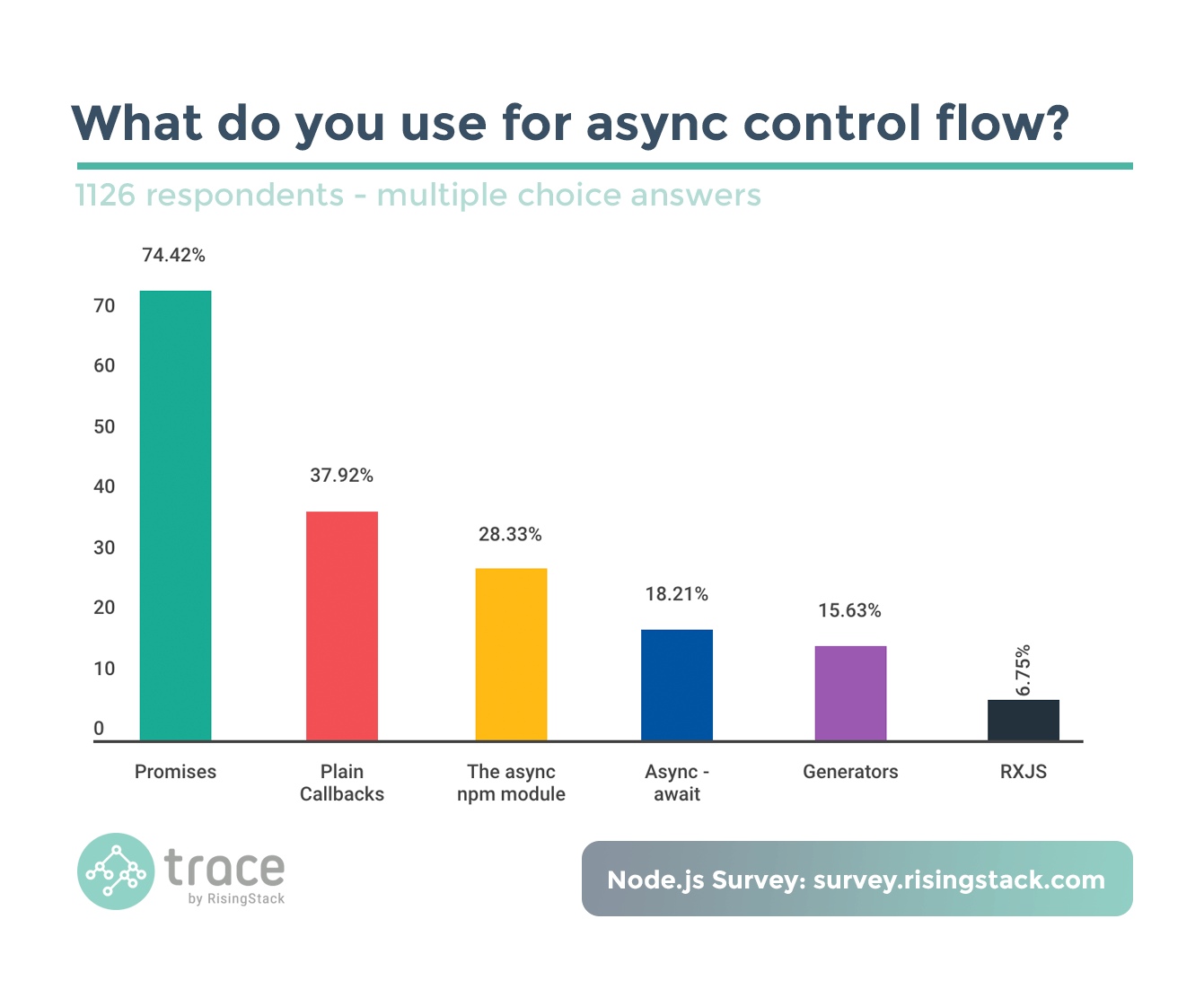 Around half a year ago there was a pull-request in the core Node.js repository asking for async functions to return a native Promise. The answer for this was: “A Promises API doesn’t make sense for core right now because it's too early in the evolution of V8-based promises and their relationship to other ES* features. There is tiny interest within the TC in exploring this in the core in the short-term.”

Maybe it’s time to revisit the issue - since the demand is present.

Developers trust the console.log for debugging

Console.log is leading the race amongst other debugging solutions like the Node Inspector, the Built-in debugger and the debug module. Around ¾ of Node developers use it for finding errors in their applications - while much-sophisticated solutions are available as well. 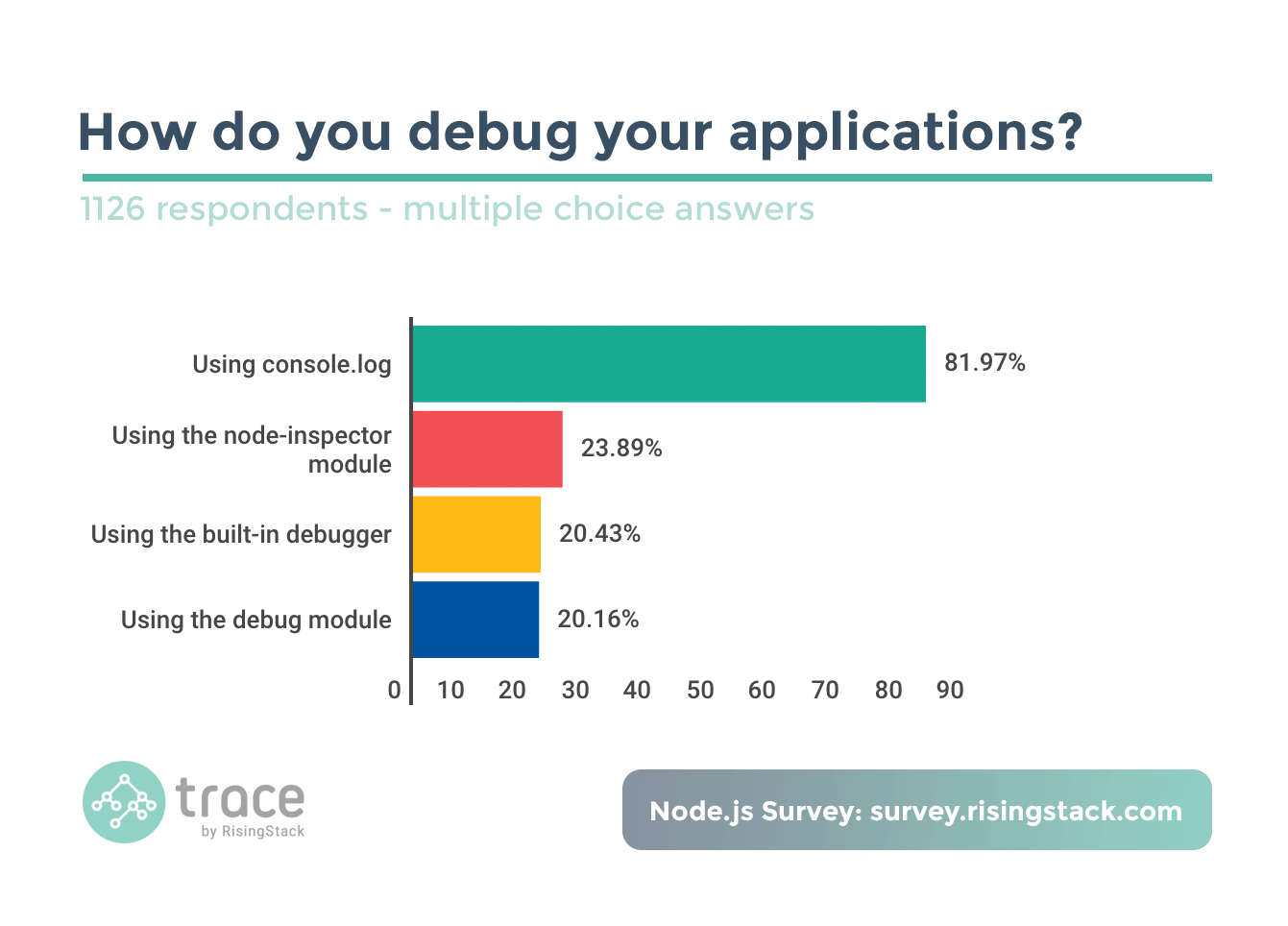 A closer look at the data lets us know that more experienced developers are leaning towards the Node Inspector and the Debug Module as well. 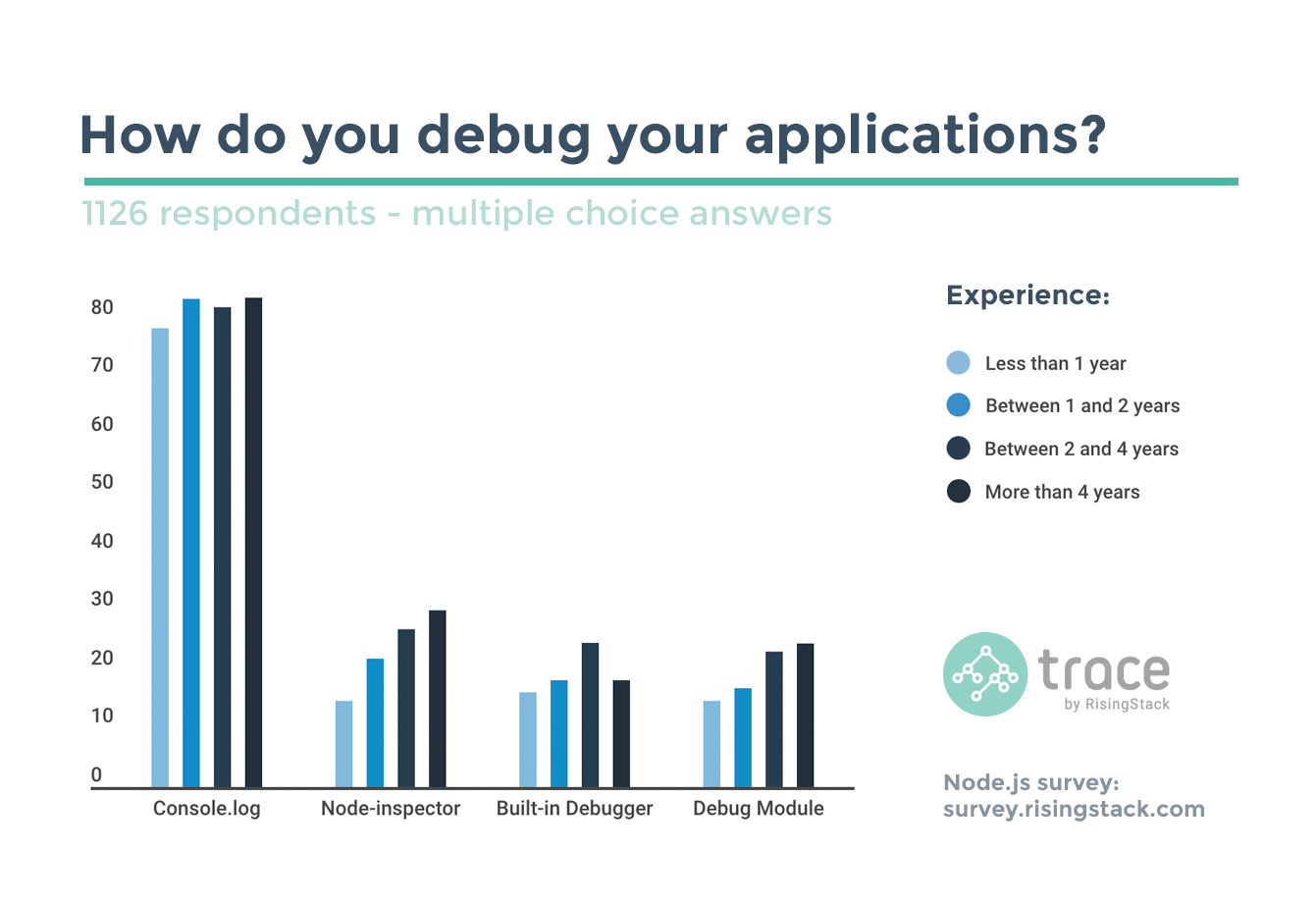 APM’s are still quite unpopular in the Node.js community

According to the responses in our survey, only ¼ of Node.js developers use APMs - application performance monitoring tools - to identify issues in their applications. Although, emerging trends in the dataset suggest that APM usage grows with company size and developer experience. 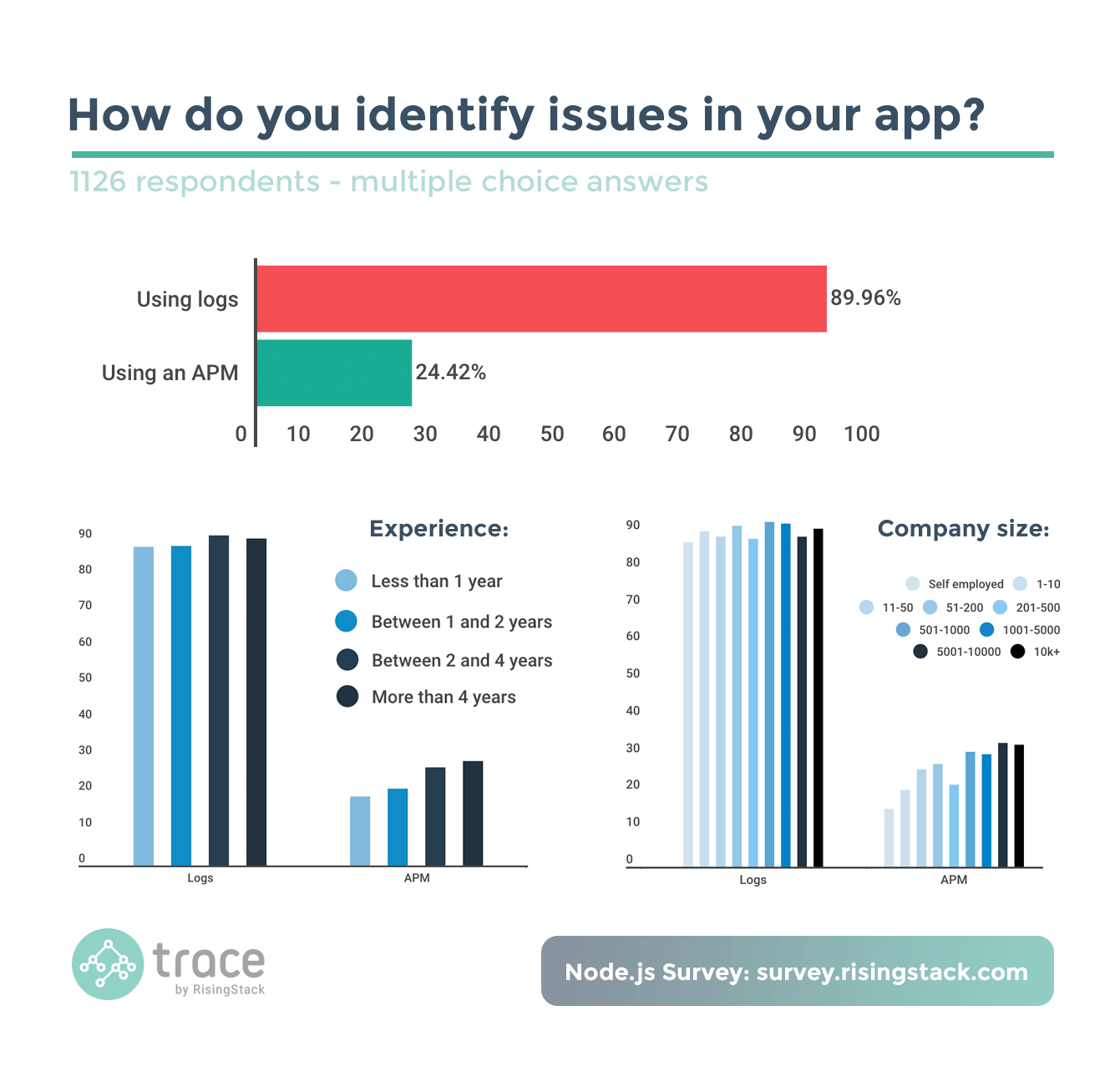 According to the answers in our survey, using shell scripts is the most popular way of pushing code to staging or production environments - but Jenkins clearly wins among continuous delivery and integration platforms so far, and is becoming more popular as company size increases. 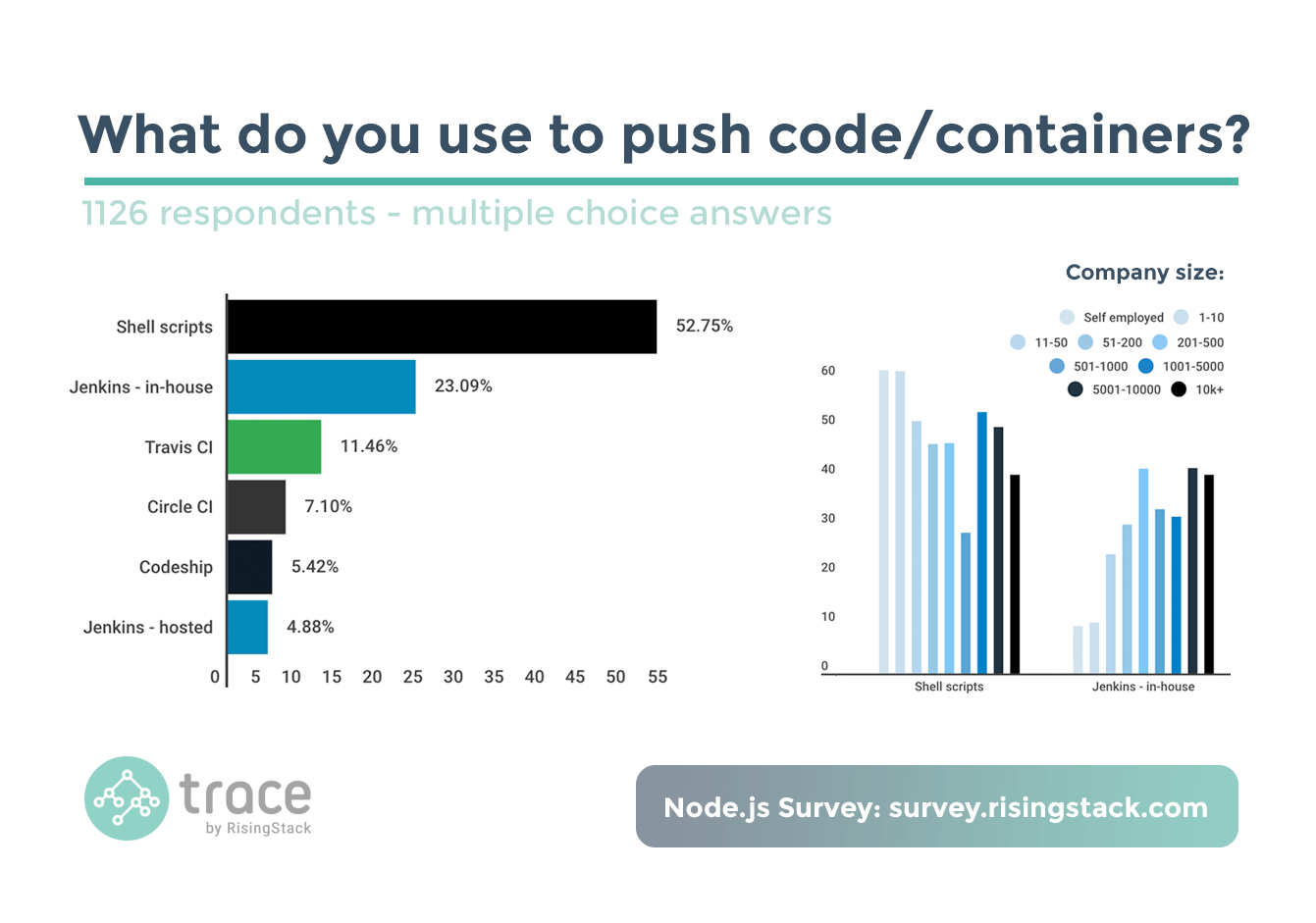 Frequently updating dependencies is highly recommended with Node.js applications - since around 15% of npm packages carry a known vulnerability & 76% of Node shops use vulnerable dependencies according to a recent survey. 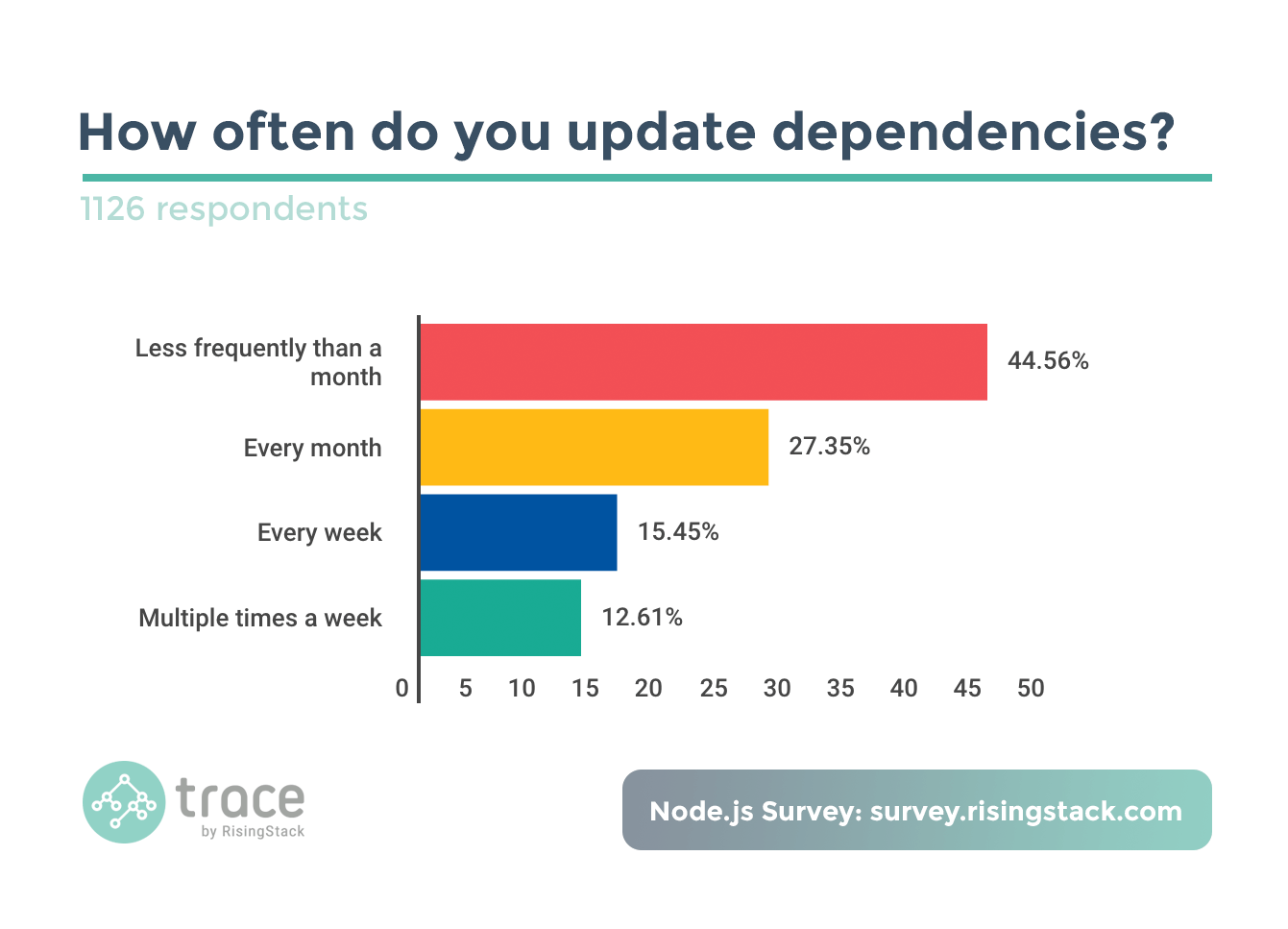 These numbers correlate neither with company size nor with developer experience.

Node.js developers Google for their packages

According to our survey, the majority of developers use Google to find packages and decide which one of them they should use. Although the popularity of the npmjs.org/npms.io search platforms is 56% amongst our respondents, the data shows that it goes up to almost 70% for the demographic group of experienced (more than four years of Node development)! Preference increases with experience in this case. 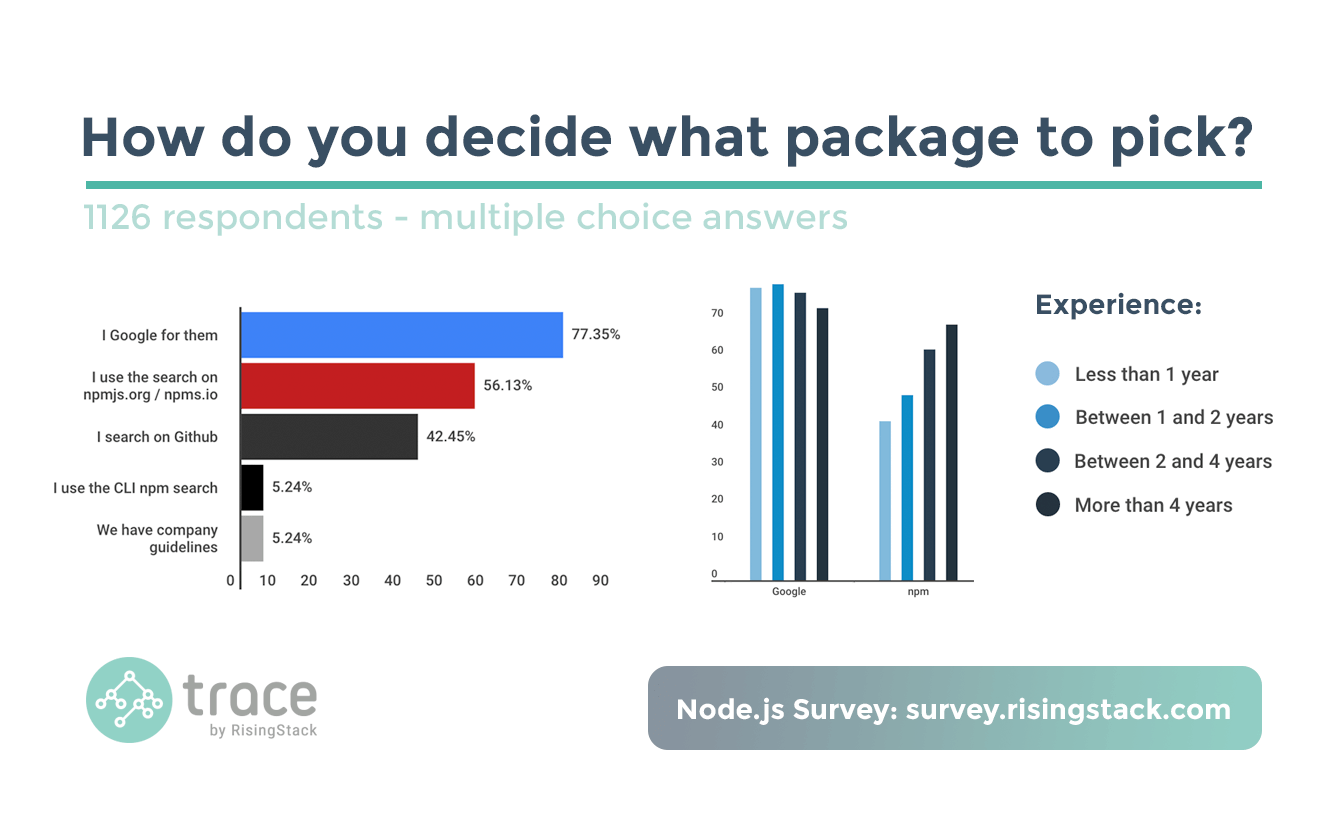 Although 71% of our respondents uses semantic versioning when publishing/consuming modules, this number should be higher in our opinion. Everyone should use semantic versioning since npm works with semver! Updating packages without using it can easily break Node.js applications. 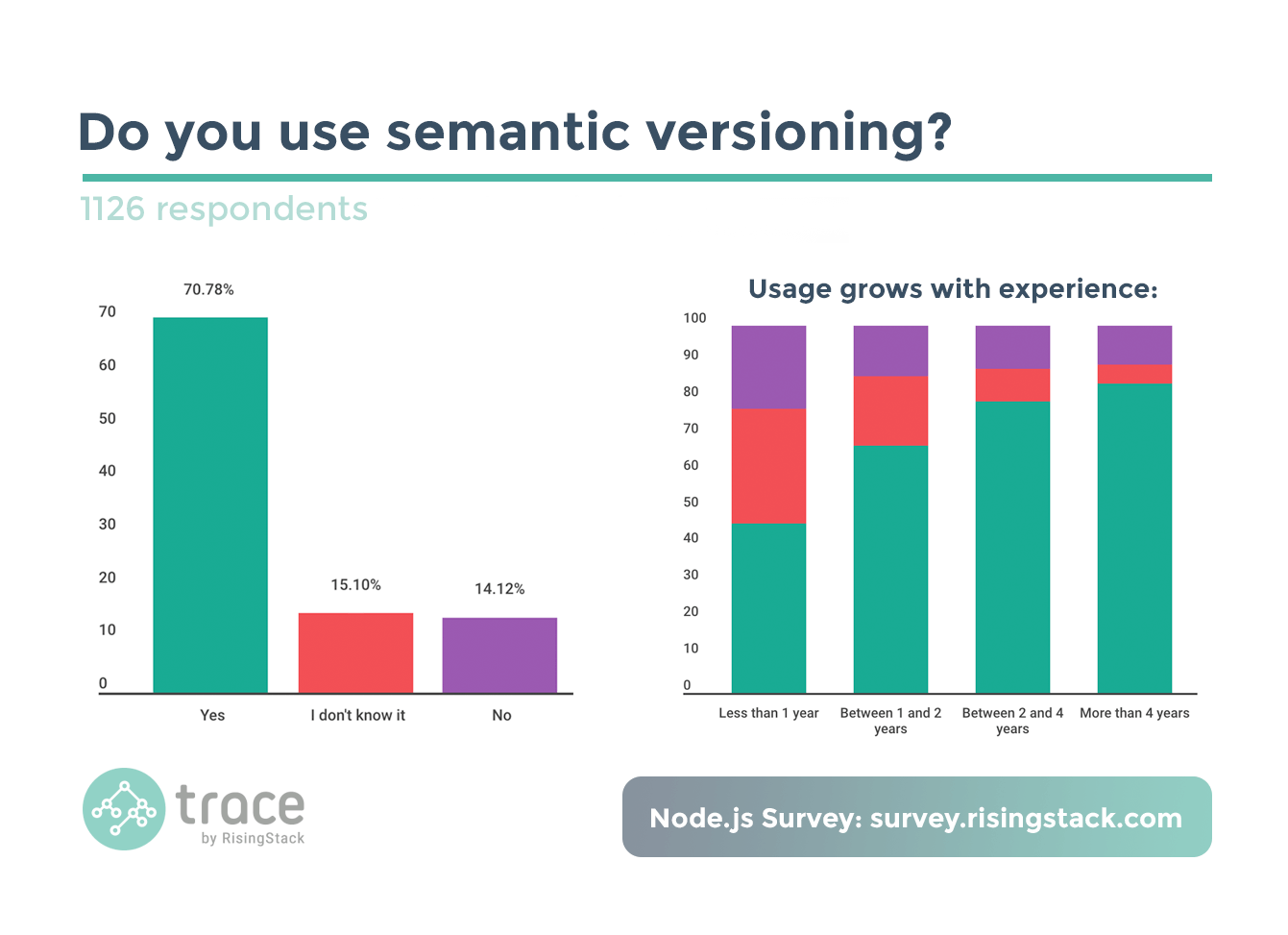 If we dig deeper in the dataset we can see that around half of the Node developers with less than a year experience don’t know what semver is or don’t use it - while advanced developers are embracing it on a much higher level.

According to our survey 35% of Node developers can introduce new tech/tools/product to their companies in a few days, and 29% in just a few weeks. 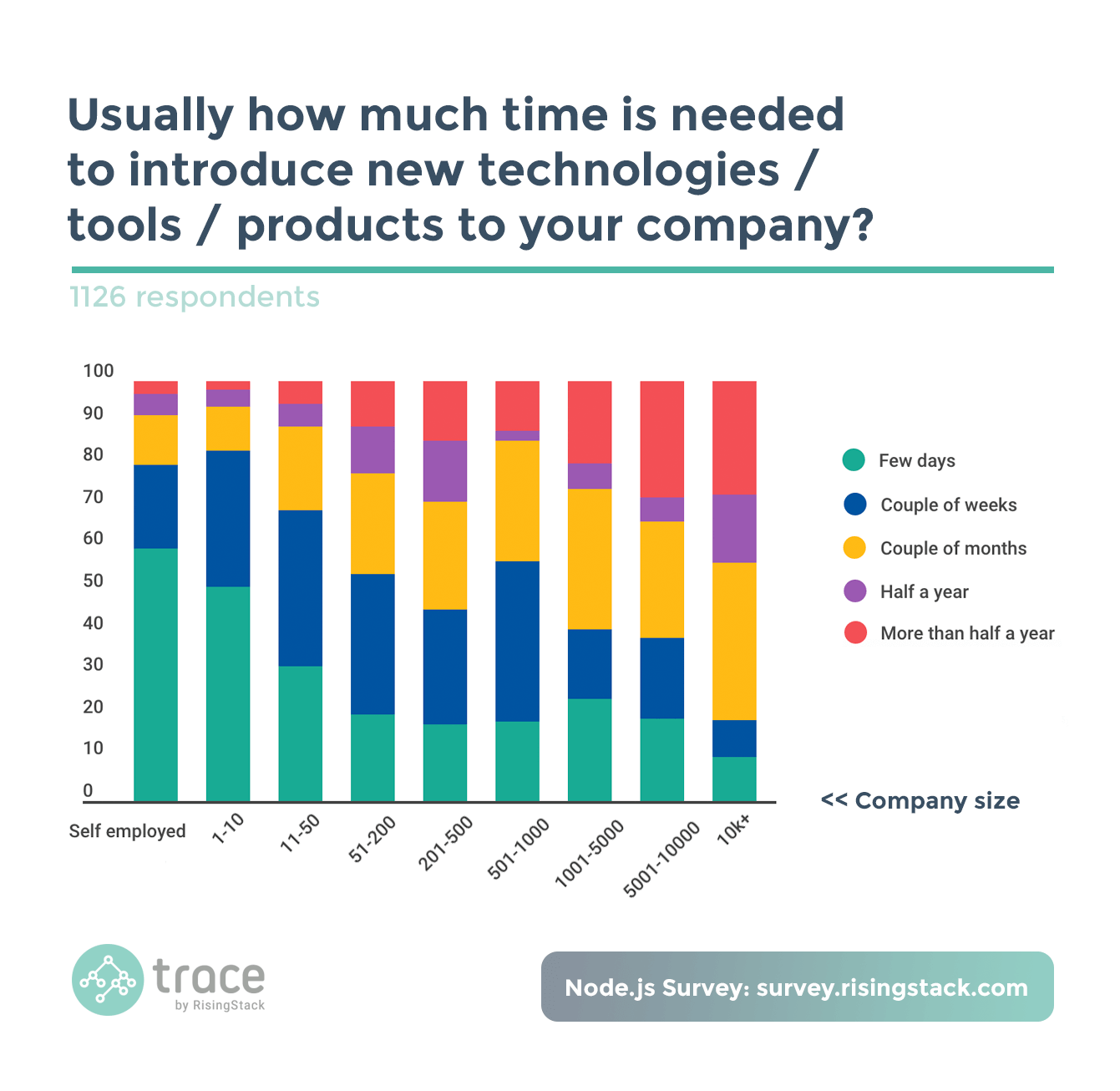 If we investigate the data more thoroughly, a not-so-surprising pattern emerges which lets us know that the time needed to introduce new tech/tools is gradually increasing with the size of a company.

Debugging is the most severe pain-point for developing with Node.js

We also asked Node developers about what's their biggest pain points regarding development. The top answers were:

Developing Node.js is still an interesting and ever-changing experience. We'd like to thank for the the engineers who took their time with answering to our questions, and we hope that the information presented in the article is valuable for the whole Node community.

The full dataset is going to be released and linked in this blogpost in a few days.